Networking Breakfast hosted by the Joint Learning Program National Capital Region
Linda Iezzi and Alex Roussakis, the Joint Learning Program (JLP) National Capital Region (NCR) Field Coordinators, would like to invite all JLP NCR facilitators and organizers to a breakfast which will be held on November 17 at the Holiday Inn hotel, located on 2 Montcalm Street, in Gatineau. The event will start at 8:30 a.m. and will end at 10:30 a.m. If you plan to attend, please confirm your attendance no later than November 4 to Linda Iezzi at iezzil@psac-afpc.com or Alex Roussakis atroussaa@psac-afpc.com.

Correctionnal Services Canada Atlantic Meeting for Joint Learning Program Facilitators
On October 6, 2011, Joint Learning Program (JLP) facilitators from Correctionnal Services Canada (CSC) Atlantic gathered in Moncton, New Brunswick. Thérèse LeBlanc, CSC Atlantic Regional Deputy Commissioner, had an opportunity to recognize JLP facilitators from CSC and offer them a token of appreciation for their contributions to the success of the national memorandum of understanding (MOU) between CSC and the JLP in the region. Nicole Gaudet, Michael Wilson, Claudette Gallant, and Sonja Power were the recipients of certificates of recognition for their role as facilitators in the recent Creating a Harassment-free Workplace (HFW) Workshop Blitz. During this two-month initiative, 36 HFW workshops were delivered to 512 CSC union and employer representatives.

Chantal Rioux, the CSC Atlantic Anti-Harassment Coordinator, provided an update as to the "Next Phase in JLP!" with respect to the delivery of HFW workshops in the region in the months to come.

Graeme Dyck and Jackie Cormier, JLP Facilitators from CSC, co-facilitated a session to support the facilitators in their preparation and delivery of learning activities from day-two of the HFW kit. The second day of a two-day workshop brings together leaders from the union and the employer to evaluate current efforts to prevent and resolve harassment in the workplace and to develop action plans that reflect the mutual commitment of the parties to create healthy, harassment-free workplaces. 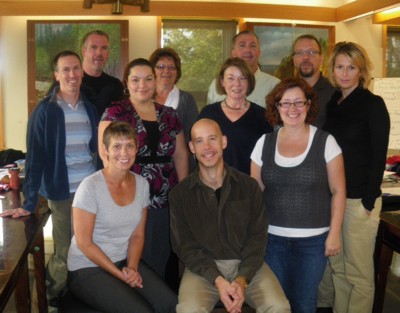 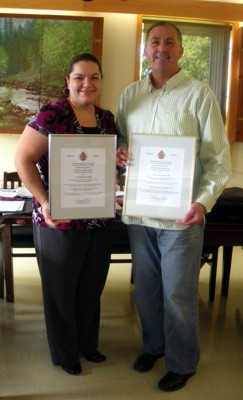 The Joint Learning Program at the Union of Canadian Transportation Employees Triennial Convention
The Joint Learning Program (JLP) had a kiosk at the 15th Union of Canadian Transportation Employees (UTCE) Triennial Convention hosted in Ottawa at the Chateau Laurier from September 24 to 27, 2011. Many UCTE members from across Canada visited the JLP kiosk and showed great interest in the JLP and the workshops that are offered. 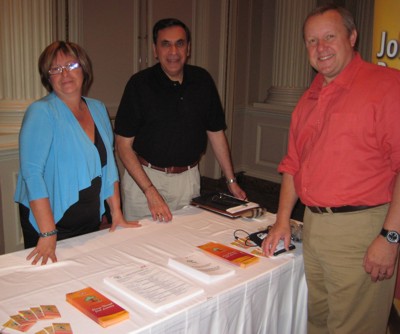 Martin Mika (on the right), a facilitator from Ontario stopped by the kiosk.
Linda Iezzi (on the left) and Alex Roussakis, JLP National Capital Regional Field Coordinators, welcomed him.

The BC and Yukon Region Facilitator Orientation Session was held from September 26 to 30, 2011, in Richmond. Participation in this orientation session consisted of individuals from organizations in the BC region with invited guests from Newfoundland and Saskatchewan. This orientation session was facilitated by Julie Ballantes (Canada Border Services Agency) and Rachel Besharah (JLP). 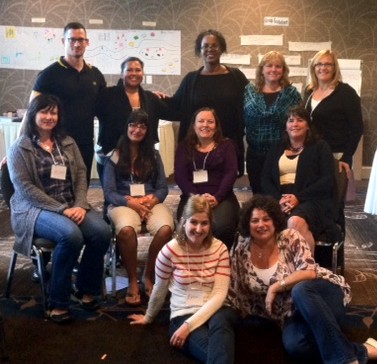 An Orientation Session held in the Prairies
An orientation session under the Memorandum of Understanding (MOU) between the Correctional Service of Canada (CSC), the Union of Solicitor General Employees and the Joint Learning Program (JLP) was held in the Prairies from September 12 to 16 in Saskatoon. By the end of the week, the 19 participants were provided with a strong foundation of facilitation skills and an overview of the JLP program and learning materials. Thus, Tracy Burton, Paul Daigneault, Colleen Dean, Donald Dupras, Stephen Fligg, Tammy Guthrie, Ron Kaban, Judy Lapohn, Sherrie Leslie, Melanie MacDonald, Stacey McDonald, Jo-Anne Moffatt, Debra Moyes, Kerris Ritchie, Sjana Sookermany, Joanne Starchuk, Cara Teichroeb, Jaymie Wunderlich andAgnes Zdrill, will have the opportunity to join the CSC-JLP pool of facilitators. Renee Auramenko and John Tremble were the facilitators.

This MOU includes the delivery of a one-day workshop on creating a harassment-free workplace to all CSC employees and training of the facilitators required for the initiative. The MOU was renewed and will be in effect during the 2011-2012 fiscal year.

The JLP Atlantic Regional Field Coordinators, Angela Leger and Wanda Thomas, and facilitator René Robichaud showcased the experiential nature of JLP workshops, the capacity to offer workshops in both official languages; as well as promote the JLP to the diverse community of practices in the Atlantic region.

The event was recommended for all federal employees based in Nova Scotia. Although all were welcome, certain topics were particularly relevant for supervisors and managers, front-line service agents and corporate services employees.