At the December 3 meeting, the following options for the participation of the other bargaining agents were discussed:

Since the last round of collective bargaining in 2011, all union members within the core public administration are eligible to participate in JLP workshops.

The new workshop aims to equip participants with the knowledge and skills they need to proactively and effectively foster and maintain a psychologically safe and healthy workplace.

This workshop is part of the commitment made by the Public Service Alliance of Canada (PSAC), the Treasury Board of Canada Secretariat and the other participating unions to raise awareness about mental health issues in the workplace. This commitment starts with creating and maintaining an inclusive and healthy workplace, and involves a coordinated and proactive effort to engage everyone in the workforce. This workshop is one of seven offered by the JLP to improve labour relations.

For details about the kit development and posting, visit the JLP’s site at jlp-pam.ca.

National Bargaining Conferences
The Joint Learning Program (JLP) set up a booth on the first day of the Public Service Alliance of Canada’s (PSAC’s) national bargaining conferences, February 13, 2014, in Ottawa.

While PSAC was preparing its bargaining teams for the renewal of collective bargaining for the PA, SV, TC, EB and FB groups, the JLP took the opportunity to remind participants of the importance of the program to maintaining and improving labour relations. The JLP exists under a memorandum of understanding with the Treasury Board of Canada Secretariat that is included in the conventions collectives. The renewal of the JLP therefore hinges on the upcoming round of collective bargaining.

2,500 Joint Learning Program Workshops
In January 2014, the Joint Learning Program (JLP) hit a milestone: 15 months after delivering its 2,000th workshop, in October 2012, it delivered its 2,500th. Requests for workshops are on track. It took 40 months to complete the first block of 1,000, and the second block was completed in 30 months, between April 2010 and October 2012. If this trend continues, the 3,000th workshop will be given in April 2015. Since it started, the JLP has obtained the support of more than 1,500 facilitators who have given workshops to more than 45,000 participants in more than 100 union and management organizations.

The pace could even pick up, with other unions joining the JLP, the creation of a new workshop on mental health in the workplace, and the increase in the number of memorandums of understanding (MOUs). Also, nearly 33,000 public servants could, at some point in the coming months, receive an invitation to participate in a workshop on their workplace under one of the 11 MOUs with the JLP that are currently in effect.

Over the course of the two days, the facilitators explored the learning activities in the kit, developed facilitation techniques and acquired the tools they need to deliver the workshop. 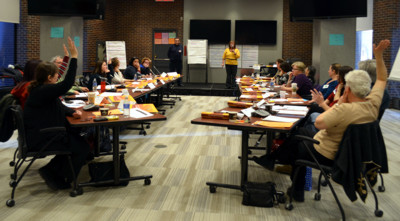 Upcoming Activities
Here are our upcoming activities for the month of March: 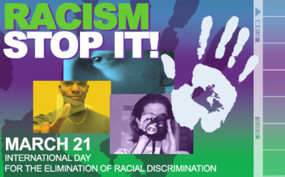 Proclaiming the Day in 1966, the United Nations General Assembly called on the international community to redouble its efforts to eliminate all forms of racial discrimination. Canada was one of the first countries to support the UN initiative.

The event was created in 1998 as a way for the OIF’s 70 member states and governments to celebrate their common bond, the French language, as well as their diversity. The Journée internationale de la Francophonie is dedicated to the French language, which is spoken by 220 million people around the world. It is an opportunity for Francophones around the world to celebrate by expressing their solidarity and their will to live together, recognizing their differences and their diversity, thereby sharing the values of La Francophonie. The date chosen for this event is the anniversary of the first Francophonie organization, the Agence de coopération culturelle et technique, at the Niamey Conference on March 20, 1970.

In March, in connection with this day, the OIF and a number of countries organize the Semaine de la langue française et de la francophonie.