Each year at this time, Canadians celebrate women’s economic, political and social achievements, and reflect on the challenges and barriers that remain. It is also a time to celebrate progress toward equality for women and consider future steps to achieving equality in all aspects of women’s lives.

When you become a JLP facilitator, you join a community of more than 1,500 union and employer facilitators across Canada who have participated in the JLP since 2002. JLP facilitators work in many different kinds of jobs and represent almost all federal government departments. Some of them hold union positions, some of them are managers and executives, and all of them are connected by a common interest in working collaboratively to inspire positive change in their workplace.

When JLP organizes an orientation session, it tries to ensure a balance of union and employer participants. It also considers equity representation, location, workshop interests, suitability, availability, and manager support in determining whether to invite you to a particular orientation session.

Through their involvement with the JLP, many facilitators tell that they experience personal growth and a renewed commitment to their public service careers. They develop new skills and form new friendships. And they get great satisfaction from successfully co-facilitating learning events that create a space for dialogue among their peers.

The facilitators’ Orientation Session was held in Gatineau, from February 18 to 22. The session was facilitated by Rachel Besharah and Angela Léger.

Joint Learning Program Promotion at the Service Canada Team Leader Forum for the Western Canada and Territories Region
The JLP was invited to participate in a full day café-style promotion at the Team Leader Forum in Surrey on February 13, 2013. Three hundred Service Canada Team Leaders had an opportunity to learn about how the JLP can assist in their work places and what the program has to offer.

Skills Development Clinic in the British Columbia and Yukon Region
The British Columbia and Yukon Region hosted a skills development clinic for JLP Facilitators on February 13 and 14, 2013 in Richmond British Columbia. The objectives of the session were to develop new competencies, hone already acquired skills, and share best practices. Both days were packed with learning and demonstrations exploring new techniques, as well as dialogue and discussions focused on dealing with difficult facilitation situations. 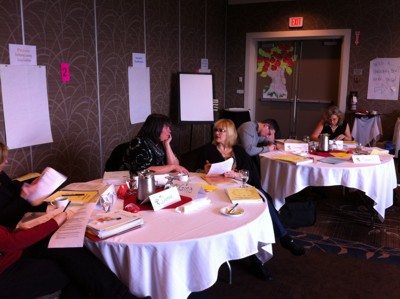 The Atlantic Regional Field Coordinators thank Claudette Brokenshire and Susan Manning, JLP Facilitators, who promoted the JLP at this event.