Atlantic Facilitators Recognized for Contributions to the Joint Learning Program
In support of facilitator development and the delivery of the new Mental Health in the Workplace workshop, a kit clinic was held in Halifax, Nova Scotia, from June 3 - 5, 2014. During this event, Joint Learning Program (JLP) Atlantic recognized Karen Beamish, an employer facilitator, and Jacqueline Cormier, a union facilitator, for over 10 years of ongoing commitment and contributions to the JLP. This was part of a national appreciation initiative in honor of active facilitators with the JLP during the period of 2003 - 2013. 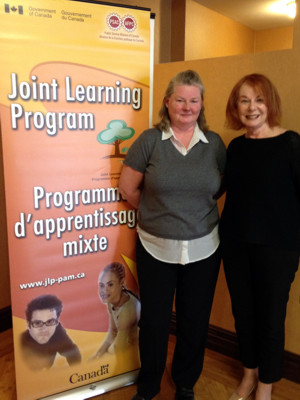 Yvan Thauvette, National President and Debi Buell, National Vice-president of Union of Veterans’s Affairs Employees visited the JLP to share Mrs. Buell’s “Atlantic Voice Award”. The Atlantic Region of the PSAC presented the award to her in recognition of her stewardship, leadership and mentorship. Debi Buell is a JLP facilitator and signatory of the regional Memorandum of Understanding between JLP, Veterans’ Affairs Canada and UVAE. 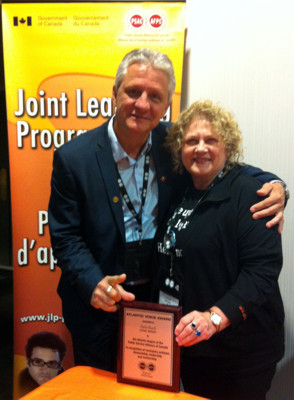 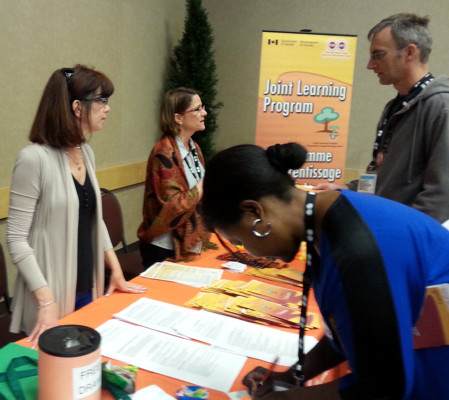 Carol Casey and Corrinne Mitchell at the JLP kiosk

Over the last few years, managers have been asking for increased awareness, more support and better tools to help them deal with mental health issues in the workplace. On June 9, the JLP launched its new Mental Health in the Workplace workshop and the Atlantic RFC answered all the questions about this new offering and how to bring it to the workplace.

Public Works and Government Services Canada Awards of Excellence: a facilitator of the Joint Learning Program recognized
On June 17, as part of the National Public Service Week, the Public Works and Government Services Canada (PWGSC) Awards of Excellence was held. It is the highest distinction awarded by the Department. Presented annually since 2003, these awards are designed to recognize employees who, alone or as a team, go above and beyond and enhance the Department reputation embodying the core values of PWGSC: respect, integrity, excellence and leadership. The work of Edmond Maltais, Labour Relations Senior Advisor in the Quebec region, has been recognized on this occasion in the category sharing / transfer of knowledges.

Mr. Maltais is rated the award for his contribution in the field of labor relations. Under the Joint Learning Program, he facilitates, among others, the workshop on understanding the collective agreement. He was also, during more than two years, member of the Executive of the Labour Relations Interdepartmental Committee, which brings together federal departments professionals in labor relations of the region. During his tenure, he has shared in different ways his knowledges of issues and trends in labor relations. 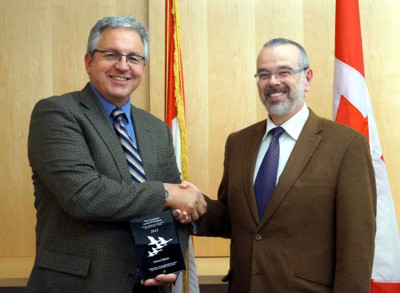 Edmond Maltais, left, was presented with his award by the
Regional Director General, Richard Meroni. 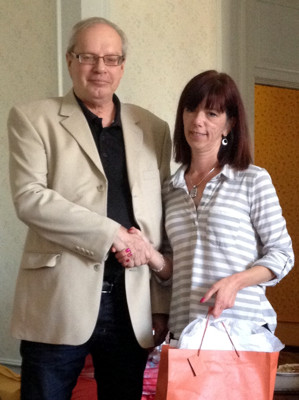 Sharon Bath, a Parole Officer for Corrections Service Canada (CSC), was also recognized for her 10-year contribution to the program. In addition to being a CSC Memorandum of Understanding facilitator, she has also delivered five workshops for the general JLP program.