New Employees to the Joint Learning Program
The Joint Learning Program (JLP) is glad to announce the arrival of two new members to its team. Marcia Vergara, as Program Officer (Employer) and Jayne Billington, as Regional Field Coordinator, British Columbia and Yukon Region (Employer) joined the JLP on June 11. Marcia can be contacted at 613-560-2979 or by email at
vergarm@psac-afpc.com, and Jaynes’s coordinates are 604-666-8217 and
billinj@psac-afpc.com.

Understanding the Collective Agreement Kit Updated
The Joint Learning Program (JLP) announces that the Understanding the Collective Agreement kit has been updated and is posted on the JLP website. The purpose of the update was to remove references to old collective agreements and articles. New sample articles have been included as well as ensuring accuracy of all sources related to article numbers.

At the time that the kit was updated the Technical Services (TC) and Border Services (FB) agreements had not been finalized. This should have no impact on the learning objectives of the workshop. The basic skills involved in doing the exercises in this workshop are transferable from one Collective Agreement to another.

On June 13, 1996, the Governor General of Canada proclaimed June 21st to be National Aboriginal Day, offering Aboriginal peoples an excellent opportunity to share their rich, diverse cultures and history with family members, neighbours, friends and visitors.

First Nations, Métis and Inuit people will gather to celebrate and share with spectacular dance, song and theatrical performances both contemporary and traditional. National Aboriginal Day is an opportunity to learn more about Aboriginal people and their contributions to Canada. Share in the Celebration!

Joint Learning Program exhibits its initiative at APEX Symposium
The Joint Learning Program (JLP) was an exhibitor at the Annual APEX Symposium which was held on May 29th and 30th in Ottawa. Representatives of the JLP staff were on site to provide information to close to 750 public service executives registered at the Symposium. Comments were positive with visitors some of who were learning about the JLP for the first time.

The Atlantic School was a learning event for activists, stewards and others who represent members in the workplace. 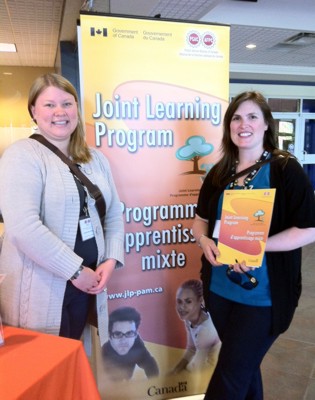 Caroline Morais Gregan (Union of Solicitor General Employees ),
on the left, is a facilitator with the Joint Learning Program.
Darlene Tait (Union of National Employee), on the right, said that
she was interested in becoming a JLP facilitator.

Denis Trottier and Mark Pecek, JLP Co-directors, participated in this event and took the opportunity to recognize six JLP facilitators for their outstanding achievements and contributions to the JLP. They are as follows: 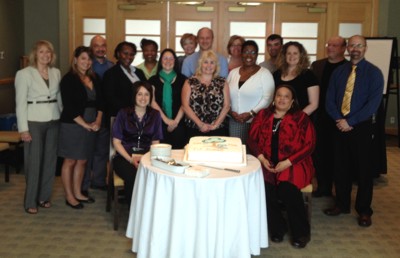 Participants with the co-directors and the regional field coordinators

Joint Learning Program at National Managers’ Community Professional Development Forum 2012
The Joint Learning Program (JLP) was an exhibitor at the National Professional Development Forum at the Winnipeg Convention Centre on May 7th to 9,th 2012. The theme of the forum was 'The Leadership Journey: Managing in a New Era' and focused on managing in challenging times. 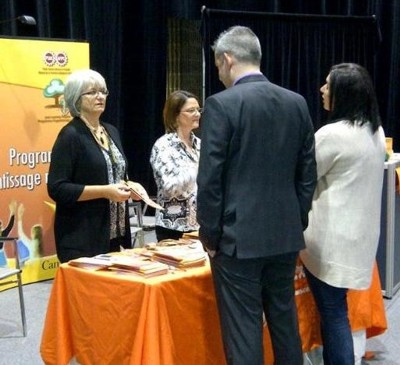 Judy Freeman, on the left, and Carol Casey greet visitors

In April 2010 the program achieved an important milestone having delivered its 1,000th workshop since it began delivering workshops again in January 2007. The program is now well on its way to achieving its next milestone having delivered 1,700 workshops as of February 1, 2012. This translates into 3,400 facilitation opportunities; over 3,400 organizers have introduced the JLP into their respective workplaces and approximately 34,000 PSAC members and managers have participated in one of the program’s workshops. These staggering figures testify to the program vitality and reputation and would not be possible without the participation of thousands of PSAC activists who promote the program in their workplaces, volunteer to become facilitators and help organize workshops for their colleagues.

The JLP had also a kiosk at the Convention which was held from April 29th to May 4th, in Ottawa. 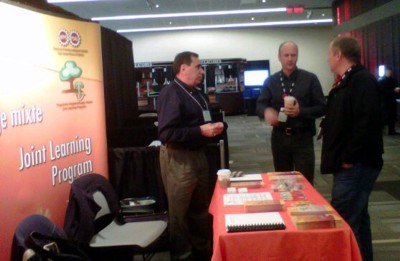 Alex Roussakis, Regional Field Coordinator, National Capital Region,
on the left, and Mark Pecek, in the middle, with a visitor to the JLP kiosk 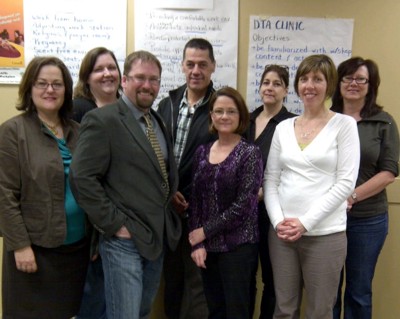 The DTA clinic participants in Regina 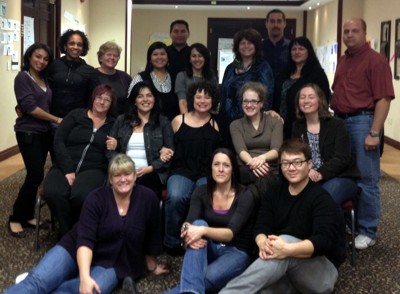 The NCR Orientation participants in Ottawa.