Mental Health in the Workplace: A New Joint Learning Program Workshop
The Joint Learning Program Steering Committee has approved the development of a workshop on Mental Health in the Workplace. The purpose of the workshop is to equip employees in the core public administration with the knowledge and skills to proactively and effectively support a psychologically safe and healthy workplace.

A Reference Committee of subject matter experts and representatives from the Union and the Employer is being finalized. The development of the workshop will begin over the summer months. Stay tuned to learn more about this project.

Orientation Session in Montreal - New Facilitators
17 facilitators, including those subject to a memorandum of understanding between the Joint Learning Program (JLP), Service Canada and the Canada Employment and Immigration Union, and between the Canadian Space Agency Canada, Natural Resources Union and the JLP, and participants from the National Capital and Atlantic regions have been recently welcomed in the facilitators' pool.

The orientation session was held in Montreal from May 27 to 31, under the facilitation ofMarcia Vergara, a JLP Program Officer and Monique Bernier from Service Canada. 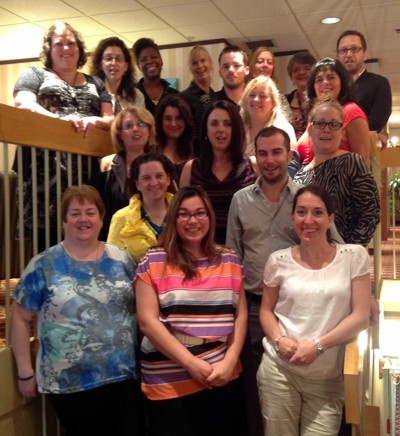 Regional Women's Conference Public Service Alliance of Canada-Quebec, from May 31 to June 2
The Quebec Joint Learning Program (JLP) Regional Field Coordinators, Manon Bouchardand Carolle Lajoie, held a promotional booth at the Regional Women’s Conference which was held under the theme "Walk to all the power: the feminist revival."

More than 60 people attended the conference, which was attended by representatives of women's committees at local and regional levels. Many have shown great interest in the kits and in the opportuntiy to recruit or to become new facilitators.

Magali Picard, Regional Executive Vice-President (REVP) for Quebec, and Monique Deryalternate REVP had the opportunity to recognize the JLP in the workplace and the importance of it in organizations. 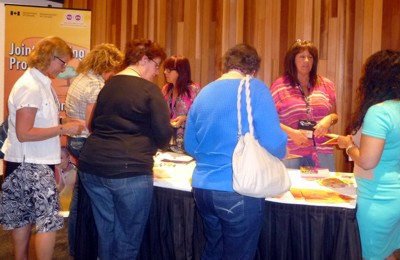 Joint Learning Program Exhibits its Initiative at APEX Symposium
The Joint Learning Program (JLP) was an exhibitor at the Annual APEX Symposium which was held on May 28th and 29th in Ottawa. Representatives of the JLP staff were on site to provide information to close to 750 public service executives registered at the Symposium. Comments were positive with visitors and some of them learned about the JLP for the first time.

The day was one filled with sorority, solidarity, and learning, and the Joint Learning Program was on site to network with activists and future and current British Columbia-Yukon Territory facilitators.

Public Service Alliance of Canada National Capital Region Women’s Conference
The Joint Learning Program (JLP) had a booth at the Public Service Alliance of Canada (PSAC) Women’s Conference held on April 27. About 60 participants attended the event. Distinguished guests were present such as Robyn Benson, PSAC President, and Nicole Turmel and Françoise Boivin, Federal Members of Parliament. Many people visited the booth and said that the JLP was a necessary program in the Public Service.

Promotion in the Prairies
The Joint Learning Program (JLP) had a kiosk at the Professional Institute of the Public Service of Canada (PIPSC) at the 70th Prairie/Northwest Territories (NWT) Regional Council meeting from April 26 to 27 in Enoch, Alberta. This was an opportunity to raise awareness of the program with 60 PIPSC members in attendance and to discuss the possibility of PIPSC members and Management co-hosting workshops in the region.

Carol Casey, Prairie/NWT Regional Field Coordinator made a Joint Learning Program presentation to more than 40 Public Service Alliance of Canada Prairie Regional Council members and Component Regional Vice Presidents at a joint meeting held in Calgary on April 19. The focus of the presentation was to provide information about the program and to request the participants’ assistance in promoting the JLP to their respective Locals and Regional/Local Union Management Consultation Committees.