Job Opportunity
The Joint Learning Program wants to advise you that a job notice for a Regional Field Coordinator (Employer) position for the Ontario and Eastern Arctic Region has been posted. Interested parties must apply through Publiservice. The competition closes on April 25, 2012.

Please stay tuned to see photos and to read about these activities.

Duty to Accommodate Workshop Clinics in Prairies and Northwest Territories Region
The Prairies and Northwest Territories Region is hosting three Duty to Accommodate (DTA) Workshop Clinic. The first two clinics were delivered on March 28 and 29 in Winnipeg, and on April 11 and 12 in Edmonton. The third one will be held in Regina on April 25 and 26. 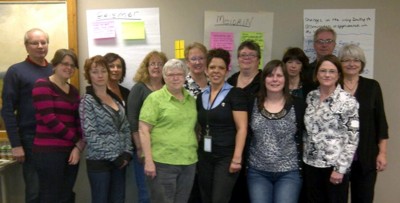 The Participants in Winnipeg. 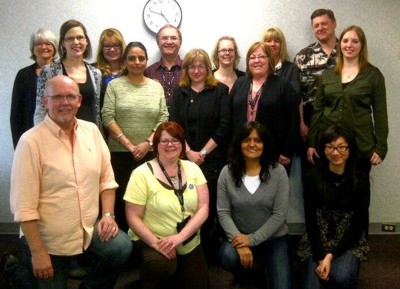 The Participants in Edmonton.

The first DTA workshop in the Prairies Region will be held on April 26 in Lacombe, Alberta. The Department of Agriculture and Agri-Food and the Agriculture Union will host this workshop.

The theme was Mental Health in the Workplace. Karen Alexander and Romeo Jackson, Regional Field Coordinators, were on location and took the opportunity two promote the new Duty to Accommodate workshop to the attendees.

Duty to Accommodate Workshop Clinic in the Quebec Region
The clinic on the Duty to Accommodate (DTA) workshop in the Quebec Region was delivered in Montreal to 15 facilitators on March 28 and 29. The two-day session enabled participants to facilitate core learning activities and experience the benefits of this kit. Facilitators in the region had the opportunities to analyze the kit and to network with colleagues, to share ideas about learning activities as well as tips and tools for facilitation. 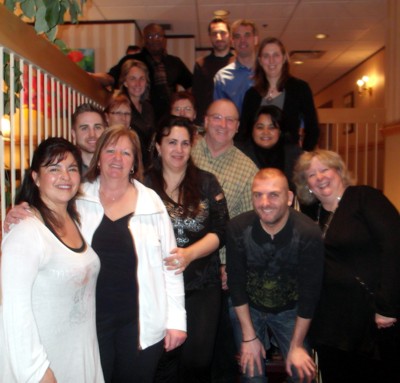 The Participants in the Quebec clinic. 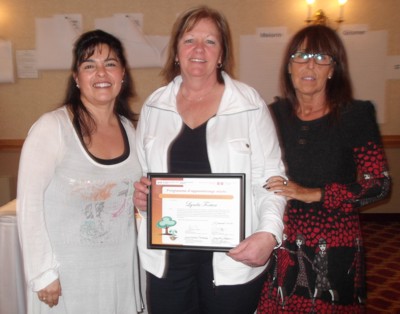 Carolle Lajoie, Regional Field Coordinator (Employer), on the right,
was on site to open the clinic and to celebrate Lynda Fortier’s (center) retirement.
Marcia Vergara also appears in the picture.

Participant feedback with respect to the DTA workshop included:

The co-organizers were Joel Kerstens and Greg Lawlor and Mike Hamper andLorraine Voisine were the facilitators. 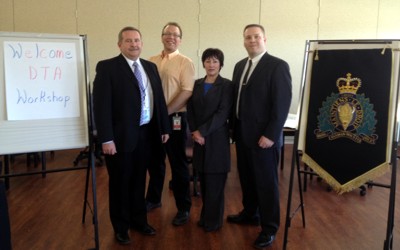 The first workshop will be held in Cornwall, on May 3 and 4. The host will be Service Canada.

Joint Learning Program Atlantic Participates in Diversity and Mental Health Fair
The Human Resource and Diversity Committees of the Newfoundland and Labrador Federal Council invited Joint Learning Program (JLP) to participate in their Diversity and Mental Health Fair held in St. John's, Newfoundland, on March 12, 2012. Opening remarks from the Chair of the Diversity Committee highlighted the committees recent participation in the two-day JLP Respecting Differences/Anti-Discrimination workshop.

Employee and employer representatives from over twenty-one federal government departments and agencies participated in this interactive fair and marketplace. The JLP kiosk had many visitors inquiring about the Program and the newest workshop topic offered - Duty to Accommodate. 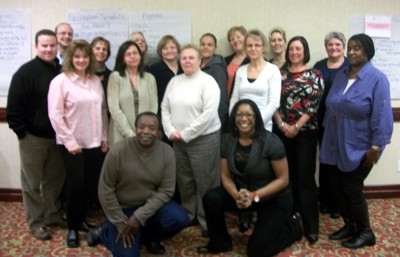 An Orientation Session in Rigaud
A national orientation session under the Memorandum of Understanding (MOU) between the Canada Border Services Agency (CBSA), the Customs Immigration Union and the Joint Learning Program (JLP) was held in Rigaud, Quebec, from March 5 to 8. By the end of the week, the 16 participants were provided with a strong foundation of facilitation skills and an overview of the JLP program and learning materials. Thus,Salvatore Barbieri, Allison Rodrigues, Annette Mastracci, An Nguyen, René Laquerre, Nicole Piche, Lucy Bettencourt, Robert Waddell, Robert Burke, Lisa Desramaux, Betty Shoemaker, David Moore, Jessica Kerek, Dennis Klein andChristine Haggar will have the opportunity to join the CBSA-JLP pool of facilitators.Marg McPhedran-Axford, Marg Gaylor and Tamara Lopez, all from CBSA, were the facilitators.

This MOU includes the delivery of a one-day workshop on Creating a Harassment-Free Workplace to all CBSA employees and training of the facilitators required for the initiative.

During the two-day clinic, the objectives that were met included: familiarization with the content of the workshop and opportunities to prepare and facilitate both core and optional learning activities, building a facilitation plan (one-day and 1.5-day agendas) to meet the needs of departments/agencies, networking with Joint Learning Program facilitators from all four Atlantic provinces, and overall preparedness to deliver DTA workshops in the Atlantic region. 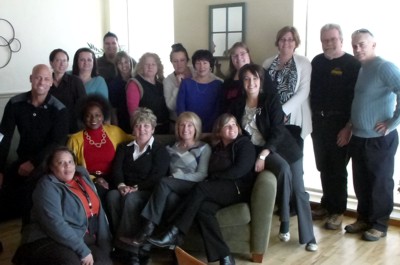