Duty to Accommodate Clinic in British Columbia
A Facilitators Skills Clinic for the new Duty To Accommodate (DTA) kit was delivered to 20 facilitators (FACS) in the British Columbia (BC)-Yukon (YT) region over February 29 and March 1, 2012. The two-day clinic provided facilitators opportunities to facilitate core learning activities, and to experience the kit from both a participant point of view. BC-YT FACs enjoyed parsing the kit and networking with one another; sharing ideas for learning activities delivery as well as tricks and tools of the trade. 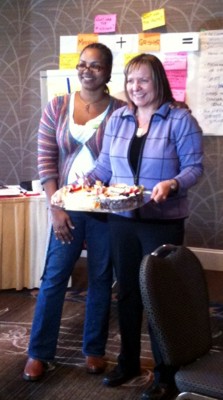 BC-YT facilitators in attendance at the Clinic in Richmond BC wished Sherry Boudreau, Regional Field Coordinator the best in her future endeavours. Ms. Boudreau will leave the Joint Learning Program (JLP) on March 31, 2012. Ms. Boudreau, on the right, receives a cake from her colleague in the BC-YT JLP Region, Karla Backer.