Public Service Employee Survey Results Available
The results of the 2011 Public Service Employees Survey (PSES) are now available on the Treasury Board of Canada Secretariat website. During a six-week period between August and October, over 201,000 public servants in 89 organizations took part in the 2011 PSES. Employees shared their thoughts on leadership, culture, the workforce, the workplace, and their own personal level of engagement. This round’s participation rate of 72.2% is the highest in history. After the results of the 2008 survey, many departments included holding Joint Learning Program workshops as part of their action plan in response to their individual results. 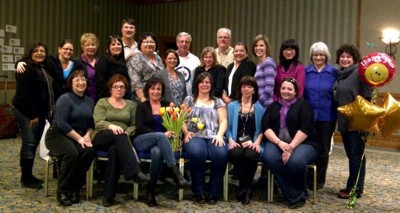 A brief overview of the contributions of some prominent black Canadians can be found on the Citizenship and Immigration Canada's website.

New Employee to the Joint Learning Program
The Joint Learning Program (JLP) is pleased to announce the arrival of a new member to its team. Joanna Nugent joined the JLP on January 27 as the new Clerk/Receptionist and will be with the JLP for the next six months. She can be contacted at 613-560-2595 or by email at nugentj@psac-afpc.com.

Regional Clinics on the Duty to Accommodate workshop will begin soon
Clinics on the Joint Learning Program (JLP) newest workshop with be held across the country during the next few weeks. The purpose of the regional Duty to Accomodate clinics is to introduce the new kit to JLP facilitators that have an interest in delivering this topic. The clinics are intended to introduce the material, identify the core learning activities and demonstrate how to build an agenda that best suits the needs of workplace workshops. Clinics help facilitators identify potential challenges related to the delivery of the workshop and to gain the confidence to deliver new learning material. For more information regarding the clinic being held in your region, please contact your regional field coordinators.

January 20, 2012
Job Opportunity
The Joint Learning Program wants to advise you that a job notice for a Regional Field Coordinator (Employer) position for the British Columbia and Yukon Region has been posted. Interested parties must apply through Publiservice. The competition closes on February 2, 2012.