10-year Facilitation Recognition
Two facilitators have been recognized recently for ten years of dedication to the Joint Learning Program (JLP).

International Women's Day is a global day celebrating the economic, political and social achievements of women past,present and future. Joint Learning Program Atlantic was an exhibitor and offered a workshop simulation from its Respecting Differences / Anti-discrimination kit. 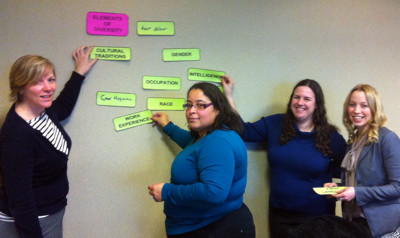 Participants in action during a learning activity

Pilot sessions for the Mental Health in the Workplace workshop are now finished. The Joint Learning Program (JLP) is finalizing the kit content for the official launch on June 9, 2014. The JLP held three pilot sessions in the last two months.

> STAKEHOLDERS' PILOT
One and half-day pilot was delivered, on February 26 and 27, to a group representing the key stakeholders. These included representatives from the Unions and the Employer, and experts in the field of mental health. The primary focus of the pilot with the stake holders was to ensure that the content has been vetted and that the core activities have been identified. 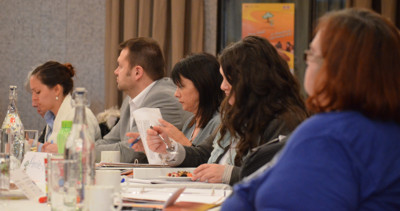 Some participants to the Stakeholders’ Pilot

> FACILITATORS’ PILOTS
Two three-day pilot workshops were delivered to groups of active JLP facilitators. The primary focus of the Facilitators’ Pilots was to assess the learning approach, materials and flow of the workshop. The secondary focus was to validate the workshop framework. The participants also received training offered by the Mental Health Commission of Canada.

Participants to the English Facilitators’ Pilot form March 18 to 20

Participants during a learning activity of the French Facilitators' Pilot,
held from March 25 to 27

The next step before the launch will be the delivery of a three-day clinic in each JLP region. The purpose of the clinics is two folds:

Many facilitators including Michael Ballard, Shawn Ewing, Kelly Sidhu, Kelly Megysi, Jessica Kerek, Carolyn McGillivray, and Christine Walker stopped by to receive information about the upcoming Mental Health in the Workplace workshop. A number of repeat organizers including Michele Wong and Alistair Crawford from Transport Canada, Marcelo Lazaro from Department of National Defence, and Nicole Jeffries from Service Canada, to name a few, also paid a visit to the kiosk.

The purpose of this agreement is to provide VAC employees with a positive, healthy and respectful workplace. The parties agreed to deliver 12 JLP’s workshops on creating a harassment-free workplace, employment equity, understanding the collective agreement, duty to accommodate and respecting differences/anti-discrimination to VAC employees and managers. The agreement covers the period of January 1, 2014 to March 31, 2016.

Strategic partnerships allow departments to benefit from JLP expertise and material in order to offer important training to many of their employees. Strategic partnerships are still active today in the areas of employment equity, workplace diversity, union-management consultation, and harassment prevention and resolution. For more information, contact the regional coordinators for the JLP in your region.

Canada’s cultural diversity strengthens the country socially, politically and economically in innumerable ways. Asian Heritage Month is an occasion for all to celebrate the beauty and wisdom of various Asian cultures.

Canadians are invited to take part in the events that honour the legacy of Canadians of Asian heritage. It is a time to participate in festivities across the country that celebrate the many achievements and contributions of Canadians of Asian heritage, who, throughout history, have done so much to make Canada the culturally diverse, compassionate and prosperous nation we know today.

NAOSH Week is held in Canada, the United States and Mexico, and focuses on the importance of preventing injury and illness in the workplace. It also increases understanding and awareness of occupational safety and health issues.

Upcoming Activities
The upcoming activities for the Joint Learning Program community are: